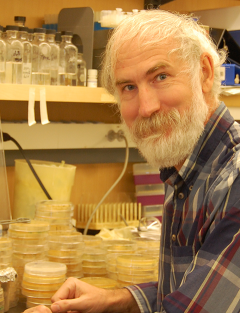 Research Assistant Professor
Molecular Biology and Microbiology
(617) 636-3618
boris.belitsky@tufts.edu
150 Harrison Ave
Research/Areas of Interest: I am interested in the regulation of nitrogen metabolism genes in the model gram-positive bacterium Bacillus subtilis and its pathogenic cousin, Listeria monocytogenes. One of the projects focuses on regulation of synthesis and degradation of glutamate, the major anion in bacterial cells and the donor of nitrogen for most nitrogen-containing compounds. A second project addresses the functions of the global transcriptional regulator CodY that coordinates the utilization of nitrogen and carbon sources under conditions of nutrient excess and is also an important regulator of virulence in many bacteria. Our third project seeks to understand the mechanism by which unusual, vitamin B6-dependent transcriptional regulators use their aminotransferase domain to regulate genes of the vitamin B6 pathway or genes involved in metabolism of nitrogen-containing compounds.