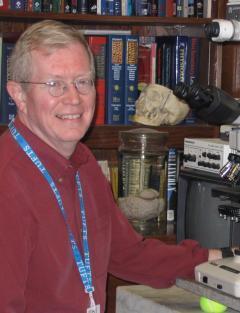 George A. Bates Professor of Histology
Developmental, Molecular and Chemical Biology
(617) 636-6626
jim.schwob@tufts.edu
136 Harrison Avenue
Research/Areas of Interest: My research focuses on the mechanisms regulating neural development. We use the peripheral olfactory (smell) system to model fundamental developmental processes, including the controlled generation of neurons and directed axon growth. One of the near-term goals for the lab is the exploitation of the easily accessible, neurocompetent olfactory stem cells for therapeutic use. The olfactory system offers what are arguably the most exquisite examples of neuronal diversity and synaptic specificity, since the roughly 1000 different types of olfactory neurons that are generated (each type defined by the expression of one of the large family of odorant receptor genes) are morphologically identical but each type differs with respect to sensory function, and each innervates a distinct target in the brain.