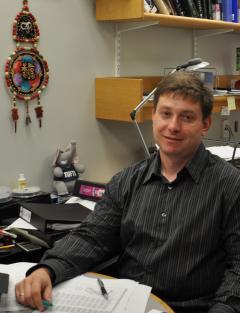 Associate Professor
Developmental, Molecular and Chemical Biology
(617) 636-0491
alexei.degterev@tufts.edu
136 Harrison Avenue
Research/Areas of Interest: My lab focuses on the investigation of the molecular mechanisms, physiologic and pathophysiological roles of regulated cell death. Regulated cell death comes in many forms from apoptosis to a rapidly expanding spectrum of non-apoptotic necrosis-like cell death mechanisms. These processes play critical roles during development and in adult organism homeostasis, for example, helping eliminate infected, damaged or transformed cells. Conversely, alterations in regulated cell death pathways lead to a variety of human pathologies from acute traumas and ischemia-reperfusion injuries to cancer and chronic inflammatory diseases. The major aims of our work are to understand how key players in these pathways mediate activation of cell death in different contexts, especially as part of protective innate immune responses, and to develop chemical probes and drug leads that can be used to interrogate and therapeutically modulate cell death processes.

Part of the focus of my lab is centered on the analysis of the roles of RIPK1/3 kinases in necroptosis and inflammation, and development of small molecule inhibitors of this kinase family. I have successful ongoing collaborations with the Balachandran and Cuny labs that instigated work leading to the current proposal. With Balachandran, I outlined the mechanism of necroptosis triggered by the interferon family of antiviral cytokines (Thapa et al., PNAS 2013) and identified new roles for RIPK1/3 in production of these cytokines during TLR-initiated inflammatory responses (Saleh et al., J. Immunol 2017). We also outlined a new signaling pathway of downstream of RIPK1 and RIPK3 that drives pro-inflammatory gene expression via ERK1/2 and NF-�B pathways (Najjar et al., Immunity 2016), and collaborates with necroptosis to promote pathogenic inflammation. Finally, all three of us (Degterev, Cuny, Balachandran) collaborated on identifying Ponatinib and other pan-kinase inhibitors as potent blockers of RIPK1/3-driven necroptosis (Najjar et al, Cell Reports 2015). This study highlights our ability to work as a team and supplies evidence of our capacity to successfully identify new inhibitors of RIPK3. We are excited to come together for studies outlined in the current proposal: our new series of UH15-based compounds offers the distinct possibility of first-in-class RIPK3 inhibitors for a range of inflammatory diseases, most of which have limited or no current treatment options.
Read More Career Highlights / Publications Research Professional Activities Courses / Teaching Activities