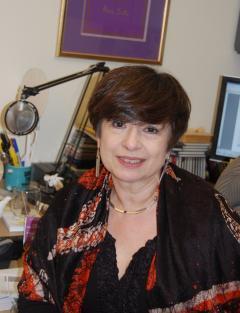 Professor
Immunology
(617) 636-6954
ana.soto@tufts.edu
150 Harrison Ave
Research/Areas of Interest: This laboratory is studying the role of sex steroids in the control of cell proliferation, mammary gland morphogenesis, and carcinogenesis & neoplasia. Over the years, research in this lab has sprouted in many different directions that include endocrine disruption & fetal origins of adult disease along with the topics mentioned earlier. Following the idea attributed to Boltzmann that "nothing is more practical than a good theory", the experimental approaches in the lab are guided by our theoretical framework. This theoretical framework is provided by the tissue organization field theory of carcinogenesis (TOFT) that posits that carcinogenesis is a tissue-based phenomenon akin to development gone awry, rather than a cell-based phenomenon caused by DNA mutations on genes that control cell proliferation (Sonnenschein C, Soto AM. 1999. The Society of Cells: Cancer and Control of Cell Proliferation. New York, Springer Verlag). Additionally, we recently have proposed principles for a theory of organisms, which allowed us to develop useful mathematical models of morphogenesis.