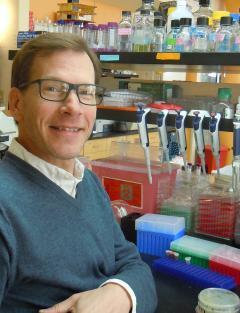 Professor
Molecular Biology and Microbiology
(617) 636-2144
andrew.camilli@tufts.edu
136 Harrison Avenue
Research/Areas of Interest: The long-term goals of my laboratory are to increase our understanding of the life cycles of mucosal pathogens, to develop ways to treat or prevent infections by them, and to help train the next generation of biomedical researchers and teachers. We use two model pathogens in our research, Vibrio cholerae and Streptococcus pneumoniae. V. cholerae is a motile bacterium that maintains a substantial environmental reservoir and causes endemic and epidemic cholera in many underdeveloped nations. An efficacious vaccine to prevent cholera is lacking. In contrast, S. pneumoniae is a strict human pathogen with no known environmental reservoir. An efficacious vaccine exists that protects against a minority of serotype strains, however S. pneumoniae remains a major cause of mortality. Our primary research focus is identifying V. cholerae and S. pneumoniae genes and their protein products that are expressed during the infection process and during transmission, and then elucidating their regulation and function. We have chosen this focus because, firstly, bacteria generally express genes only when and where needed, and thus do not readily reveal their pathogenic armament outside of infected tissues. Secondly, detailed knowledge of the behavior of pathogens and the antigens they express during infection and transmission are crucial to development of more effective vaccines, antimicrobials and diagnostics. Our studies have revealed a number of important findings concerning the life cycle of V. cholerae and ways to prevent infection. These include the discoveries that V. cholerae exits humans in a heightened state of infectivity, but that lytic phage, commonly present in cholera stools, can antagonize transmission and subsequent infection. We hypothesize that the hyper-infectious state of V. cholerae aids in transmission and therefore the rapid spread of cholera during outbreaks. In contrast, we propose that lytic phages function to moderate infections and to reduce transmission. We are currently developing phage therapy and phage prophylaxis to treat and prevent cholera infections, respectively. Our studies on S. pneumoniae have revealed hundreds of previously unrecognized virulence factors using mouse models of colonization and infection, and, by using a battery of in vitro growth and stress conditions, we have revealed function for many of these genes. We have also discovered that S. pneumoniae can survive long periods of desiccation on environmental surfaces, and we hypothesis that this plays an important role in transmission of this organism. Finally, we are engaged in the development of novel types of vaccines for both of these mucosal pathogens. In the course of our studies, we have created a number of novel genetic tools, some of which are now used widely in the research community.

My scholarship and teaching center on gaining a deeper understanding of the life cycles of bacterial pathogens, so we can use this information to develop novel vaccines and other preventatives or treatments. Training the next generation of scientists is a major part of this goal.
Read More Career Highlights / Publications Research Professional Activities Courses / Teaching Activities