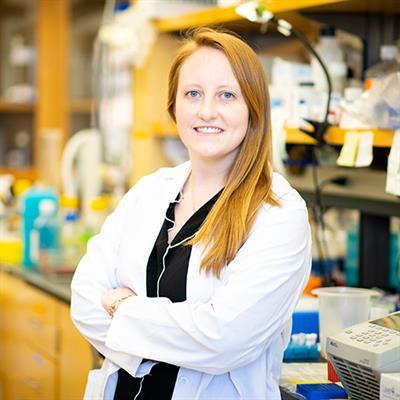 Research Assistant Professor
Immunology
hayley.muendlein@tufts.edu
150 Harrison Ave
Research/Areas of Interest: Cell death processes are critical for the clearance of infected or damaged cells, the elimination of pathogenic niches, and in some cases the release of intercellular components and pro-inflammatory cytokines to promote the host immune response. However, when cell death is dysregulated, the results are often catastrophic, resulting in infectious and autoimmune diseases, excessive inflammation, organ failure or cancer. Therefore, throughout the life of an organism it is imperative that cell death processes are tightly regulated. Characterization of cell death into discrete pathways based on cellular morphology and required effector proteins began in the 1970s with the description of apoptosis. Over the past several decades, numerous additional forms of cell death were discovered, including the necrotic forms of cell death known as necroptosis and pyroptosis. However, our understanding of these distinct pathways is reaching a critical point, as it becomes increasingly apparent that rigid classification of these processes into individual pathways is not always possible. Instead, we were beginning to find that there is considerable crosstalk between these various processes, with many proteins playing roles in the regulation of multiple pathways. I am fascinated with the idea of shifting the dogmas of cell death and discovering the intricate connections and crosstalk that are yet to be uncovered. Equipped with this interest, my work has led to the identification of novel functions for two key cell death effectors: RIPK1 and cFLIP. My current research continues to focus on the role of these proteins and their interacting partners in cell death and inflammatory signaling pathways. Specifically, I have demonstrated that ZBP1, previously studied only in the context of viral infection, is constitutively bound to RIPK1 and regulates cell death in response to bacterial lipopolysaccharide. Through these advances, we are beginning to build a clearer picture of the mechanisms that drive cell death under various conditions. However, our understanding of the physiological settings in which these cell death mechanisms prevail remains poorly understood. For this reason, I am focused on applying these biochemical findings in vivo using endotoxin- and TNF-shock and Yersinia pseudotuberculosis infection mouse models to study how cell death protein interactions regulate host responses and survival.